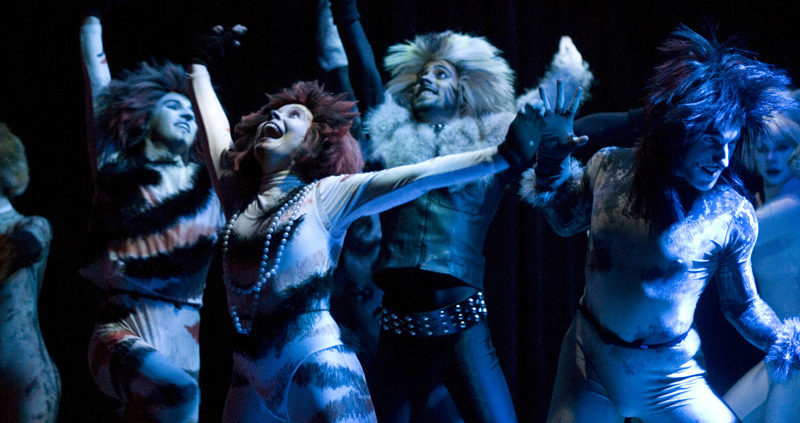 When I was in college, CATS was all the rage on Broadway, and it was the butt of endless jokes between me and my college buddies.   I hadn’t seen it, but the fact that suburban moms, families and cat people were RAVING about it, made me suspicious and downright contemptuous.  It was such a SPECTACLE and so ubiquitous, disdain seemed like the proper reaction.

Many years went by and I didn’t think about CATS very much, but if it ever came up in conversation or otherwise intruded on my consciousness, it always induced a bit of an eyeroll.  Back in 2010, I was doing photography work for Theo Ubique, a local theater company that was best known for its intimate productions of big musicals.  They were about to present their production of CATS and hired me to do the press photography, which involved photographing a live preview performance.  I set my expectations low, put my camera on my tripod, and proceeded to watch and listen.

When it was over, I have to admit, I was positively impressed.  The costuming was great, the energy and talent of the cast was palpable, and overall, it just seemed unique, fresh and artistic.  Moreover, once it was removed from the category of being a Broadway, blockbuster, spectacle, and presented in an intimate, storefront theater, by a highly talented cast and crew, I was allowed to appreciate it for its actual content.

Now, at the tail end of 2019, we have CATS the movie musical, which has been almost universally panned by critics and the public.  Immediately, upon hearing how “AWFUL” it was, the college boy inside me got excited, and I couldn’t WAIT to see this train wreck.  I, along with my husband and a couple of friends, went to see it with giddy anticipation on Christmas night.  There were about 30 people in the theater.  Sitting directly behind us was a group of 4, 20-something young women who giggled and tittered with barely suppressed laughter throughout the whole thing.  A couple young men decided that it was an interactive movie and were shouting snarky comments for the rest of us to enjoy.  I sat there fuming at people’s disrespect because what I was seeing wasn’t that bad at all.  At one point, my husband was moved to actually stand up, and tell people to STFU and grow up and let us enjoy the movie.  (thanks Aitor!)  The mood settled down a bit after that.

Here are my thoughts on the movie.  There is some initial discomfort, which may perhaps manifest itself by feeling like laughing by seeing the actors in the CGI cat outfits, looking and behaving like cats, but the sooner you accept this convention, the better.  The rude audience I saw it with was especially moved to laughter by the movement of the cat’s tails and when the cats rubbed their heads in affection as cats do.  Get over it.   If you’ve already decided you want to laugh your way through the movie, you’ll have plenty of opportunities.  If you want to accept it on its own terms, then relax and enjoy. The CATS world is fully realized.  Like the storefront production I saw 10 years ago, the performances were great…the singing, the dancing and the acting were all great.  Since CATS is based on a “Old Possum’s Book of Practical Cats (a collection of poems) by T. S. Elliot, don’t expect much of a plot here.  Enjoy the creativity, the dancing, the energy, the cast and the songs…and yes, enjoy the spectacle.

By the way, the pic is from the 2010 production of CATS by Theo Ubique.