Academics came easy to me in high school, and without much study I always made the honor roll.  As I mentioned in the previous post, I secretly longed to be a film director.  I started taking cinema studies courses at my school, the University of Illinois/Urbana, but quickly learned what a dismal program they had, and it mostly involved writing, film theory, and criticism, which really weren’t my cup of tea.   I did take an actual class or two in cinematography, but, I wasn’t as talented as I thought I was, and was bereft of ideas and funds.  I earned my first “D” grade in a class, and experienced what I considered to be my first academic failure.  I floundered.

I can’t remember if it was during my freshman or sophomore year that I enrolled in my first photography class, and I’m not even sure how seriously I took it.  It wasn’t until my third class in photography that I felt myself pulling ahead, becoming more and more interested in the work and taking it far more seriously than the other students.  I set up makeshift studios and had access to lighting equipment provided by the university.  My teachers and professors were heavily into post-modernism and feminism.  I was drawn to works by Cindy Sherman, Barbara Kruger, Joel-Peter Witkin, Diane Arbus and Arthur Tress.  These were people with something to say, and the vision to match.  My only problem was I didn’t feel passionately about much.

I know I liked theatricality and set-up shots.  I liked shooting people because it appealed to the film director in me.  What you see above are some of my experiments in portraiture along with some of my first commercial work, which was shooting a fraternity calendar. 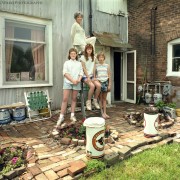 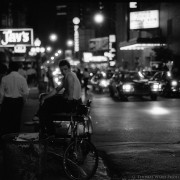 Feeling My Way In The Dark
4 replies

Feeling My Way In The Dark

“The Collectors” Series
Scroll to top